Close your eyes. Take a moment to envision an American person.

It was in elementary school when I came home one day and told my mom that I was American. She chastised me, as if I had burnt her as badly as overcooked, inedible rice.

“No, you’re not American. You’re Chinese.”

Elementary school me was confused, but didn’t talk back (#filialpiety). I knew not to bring it up again, because I had learned that saying this was just wrong in my mom’s eyes. To her, saying I was American was equal to saying that I was white and that I had abandoned my Chinese roots – almost in shame. I took that to heart, and have never said “I am American” to her again.

I don’t remember exactly when I learned the term “Asian American”, but I remember feeling some type of identification with it. To a high school me, this term was for people who “weren’t Asian enough”, and simultaneously “weren’t American enough” – but rather just existed in this middle haze. A term that did not diminish me because of something that I wasn’t. A term that unified people who also felt that they “weren’t enough”. In what we lacked, we strangely found unity. I stopped saying that I was Asian, or Chinese, or American, and now always say that I am Asian American, specifically Chinese American. The two words must come stuck together like two tapioca pearls up a bubble tea straw, of an order I made in English.

“We Asian Americans need to embrace and show our American-ness in ways we never have before. We need to step up, help our neighbors, donate gear, vote, wear red white and blue, volunteer, fund aid organizations, and do everything in our power to accelerate the end of this crisis. We should show without a shadow of a doubt that we are Americans who will do our part for our country in this time of need.” – Andrew Yang (Washington Post)

Reading this severely angered my Asian American self. My identity that I had so strongly valued in its togetherness was separated, with one prioritized over another. I felt my Asian Americanness separate and unequal, with Americanness prioritized – no – STOMPING OVER AND SPITTING AT at my Asian roots. Is my existence as an “American” insufficient? Do I have to prove how “American” I could be? I already know the answers to both of those questions; I can never be sufficient or prove my “Americanness” no matter how much red, white, and blue clothing I don.

“We are still, in the public eye, a perpetual foreigner.” – Tzi Ma (Time)

“One moment we are Americans, the next we are all foreigners, who “brought” the virus here… our belonging is conditional.” – John Cho (LA Times)

Every day when I walk my dogs, you see my eyes and think FOREIGNER. Then you see my mask and you think COVID-19 – not because everyone else is or isn’t wearing a mask, but because I’m wearing a mask. What’s worse – my un-American eyes or my disease-ridden mask? I only feel somewhat safe when I have two medium sized dogs whose leashes are attached to my physical body, and even then, am I really? I no longer know how to react to being a Brooklyn, New York Asian woman if acid gets poured on someone else who is one also. I’m not safe alone. I don’t know if or when I will be again. If Jeremy Lin is pleading for people to “just accept us as humans”, is my existence beneath humankind?

“To be Asian in America during the time of coronavirus is to feel very alone. You might think that everyone’s alone during the pandemic. But it’s a different form of isolation carved out by that insidious model-minority myth, with its implication that as long as you worked hard and didn’t ask for handouts, racial inequities could be overcome.” – Cathy Park Hong (NY Times)

“Like fame, the “model minority” myth can provide the illusion of ‘raceless-ness.’ Putting select Asians on a pedestal silences those who question systemic injustice. Our supposed success is used as proof that the system works — and if it doesn’t work for you, it must be your fault.

Never mind that 12% of us are living below the poverty line. The model minority myth helps maintain a status quo that works against people of all colors.

But perhaps the most insidious effect of this myth is that it silences us. It seduces Asian Americans and recruits us to act on its behalf. It converts our parents, who in turn, encourage us to accept it. It makes you feel protected, that you’re passing as one of the good ones.” – John Cho (LA Times)

I’m only American on the few days my dad made me ham sandwiches for lunch in elementary school because I asked for it instead of my Shanghainese or Cantonese rice dish. I’m only American when it’s convenient for the media to celebrate the successes of people whose faces resemble mine. I’m only American when the model minority myth works in my favor and has duped my parents into believing in the possibility of achieving an “American dream” where hard work could overcome racial inequities. Am I, and are others, truly included in #AllAmericans, one that extends beyond activism by and for Asian people, one that stands in solidarity with the disproportionate deaths of LatinX and black people due to societal inequities? While we all support healthcare workers (or at least I certainly hope we all do), when will we truly support each other without perpetuating further discrimination – Asians included? Am I really that radical by saying EVERYONE, STOP HATING EACH OTHER?

In my middle school, the loudspeaker blasted “Proud to Be An American” as sung by Toby Keith daily after we recited the pledge.

When you closed your eyes and imagined an American, did your own reflection come into the view of your eyes? Did you envision yourself? Are YOU free? Do you want to be free in America?

But questioning all of this, isn’t enough.

“I don’t want your love and light if it doesn’t come with solidarity and action.” – Rachel Cargle

My mother survived the “Cultural Revolution” in China. By the way, “Cultural Revolution” is read as cease all education, subscribe or die from the Mao Zedong’s Little Red Book, starve every day of your childhood, shut up or else during the house raids at my grandparents’ house, and the death of my grandfather – based on the little that my mother has told me.

I don’t know that I’ll ever be or feel fully free, but the one freedom I will never cease to use is my freedom of speech. My mom didn’t have it, and is terrified to use it now. I don’t blame her, but I can’t sit silent. Because of my parents immigrating here, I have this right, whether my “fellow Americans” acknowledge me and the fact that I can exercise it or not. I carry a lot of privilege to be able to use it, even if I feel it diminishing these days. But I have to take my chances.

Vaccines are never 100% effective, and I don’t know if any will be created that are in my lifetime. There’s one I’m testing out now, every single day and in all aspects of my personal and professional life.

I’m sharing this vaccine with you. 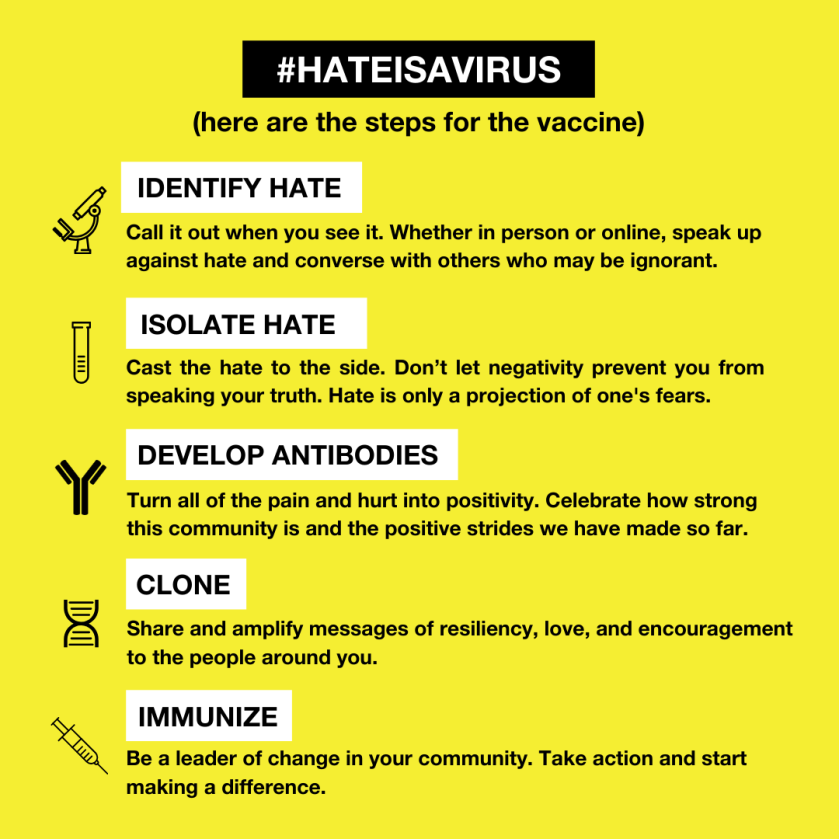 (Source: Hate is a Virus)

It is okay to be fearful. I am.

But don’t stop in the tracks of hate. Immunize.

And then immunize again. We need all of the immunity we can get.

P.S. Additional immunizations include #washthehate and #RacismIsAVirus. Feel free to triple up.

As a @nyuniversity alum, I am extremely disheartened to share that the @nyumusiced program has put all admissions to the program on immediate pause. Having attended NYU for my undergraduate and graduate studies, I am incredibly indebted to the care from my professors and the education I engaged in when I attended. As all music education programs everywhere must continue to refine themselves, with the input of students, faculty, and educational stakeholders, education cannot simply STOP for the sake of repair or refinement.
“Together forever, no matter how long” ❤️ Stay tuned for an announcement of our live, in-person Winter Arts Festival! #NewBridges
“I need to get this off my mind…
We are a little more than two months into the school year, yet we are less than two months away from Lunar New Year 2023?! No matter what part of the year we are in, we can always reflect on what we have individually been learning, and what our students have been learning in our spaces. In centering student identity through the power of a welcome song, and/or providing students lenses into personal and different cultural identities, check out my @fflatbooks audio year in review that includes:
Rolling our way into the break knowing that we are More Than Music Teachers! 🪘
“Always stay loyal to yourself and always believe in yourself and always make sure that you… that you never give up.” 💫 #NewBridges
The passing of Jarritt Sheel has been heartbreaking. Jarritt Sheel was a true light and leader in hip hop music education — the reason why hip hop and music education can even exist in sequence as such a term in our field today. I have deeply looked up to him and his work, but in the current moment, I most closely hold when we met up in Boston back in 2018 and I shared my hopes and dreams in music education, and my own experiences of hip hop and its power in my own life as a lifelong Brooklyn, New Yorker. His continued support for me, my work, and my whole self inclusive of my love for hip hop as a classically trained pianist by label and training is something I have held close to me through my career thus far. He encouraged us to remember that in incorporating hip hop in ethical and valuable ways, “hip hop is something you see and come to” — something I resonate with to this day. You have always led with a pedagogy of love, and we have so much to continue learning from in your work, your legacy, and your life. You shared your life story with me, and your deep love for your family. May you rest in loving power, as your light shines endlessly in our lives. @jsheel @hiphopmusiced @hiphoped #hiphoped #hiphopeducation
Always co-conspiring to facilitate change with @mrwilliamsonmusicroom 🔥 Excited to continue learning and serving as facilitators in NYC Citywide Professional Learning. Here’s to cultivating homeplaces, inspired by bell hooks and Dr. Bettina Love, for dreaming in our musical spaces 🎶
“This is your time to keep sharing your voice, being who you are, and shining brightly!” - @ps532newbridges Alumni 🎓 Incredible to hear alumni musicians share their musical experiences and life advice to our new Orchestra musicians this year! With reminiscing memories and laughing together, this is what community looks like ❤️ #NewBridges